Go on an unusual journey as a disembodied head 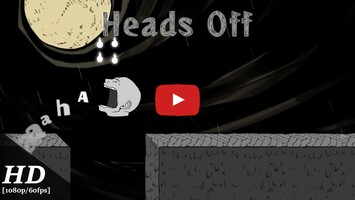 Advertisement
Heads Off is a rather strange two dimensional arcade platformer, in which your character is a disembodied head that moves through the levels by yelling. Your objective? Go as far as you can through dangerous levels full of cliffs and other obstacles.

Heads Off has a very simple control system: just tap the screen to yell. With every yell, shout, and scream, the head will move in the opposite direction. Try and get past all the obstacles with this one move!

You might find spirits as you wander though the levels, collect them to unlock new characters to play with. Although you begin the game with a single, bald head, there's many more to unlock with loads of different hairstyles.

Heads off is a very original game, with fun and addictive game mechanics, decent graphics, and a very interesting storyline. Watch some of the most important events in the head's life as you advance though the levels!
The ten best Android games of the month [December 2017]

2017 is just about to end, but the wheels of Android keep on spinning. The last month of the year doesn't usually bring an excess of quality game launches, but it seems like this year is an exception. Today we bring you the most notable Android games of December, a month which has seen the launch of a number of gems that can't be missed. Also, don't forget to check out our YouTube channel to see gameplay videos of all of the best games on Android devices.
See more

There are opinions about Heads Off yet. Be the first! Comment

Similar to Heads Off

Temple Run
Run for your life and pick up treasure as you go
Geometry Dash
A platformer to play with just one button
Vector
Parkour's most spectacular chases
Danger Dash
Don´t stop running and avoid the tigers
Red Ball 4
A platformer starring a red ball
Super Mario 2 HD
Amazing fangame based on the Nintendo hero
Sonic the Hedgehog
The classic. The first. The best.
Sonic Dash 2: Sonic Boom
Put on your sneakers again with Sonic
Advertisement